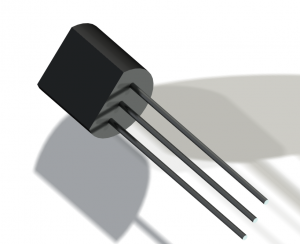 Transistors are one of the greatest inventions of all time. These little doohickies are what have made cool things like cell phones, computers, and just about anything tech-like possible. To keep things simple, we are going to look at one an example of a transistor. They all work pretty much the same, but there are a lot of different facts we don’t need to concern ourselves with at this point. So, here is a transistor:

Notice that unlike most other electronic components, this one has three leads (wires) sticking out of it. Transistors are packaged a lot of different ways, but they almost all have three leads (you might try doing a google image search on transistor). 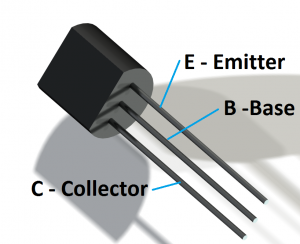 On a schematic, the symbol for a transistor usually looks like this: 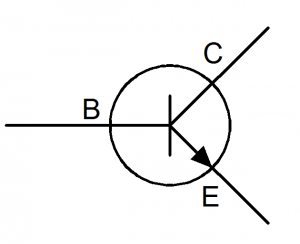 It won’t have the B, C, and E labeled on it, though. If your transistor looks different from the one above, check the spec sheet to see which terminals are the base, collector and emitter.

Also, if the transistor symbol looks different from the one above, it is a different type. It will work a little differently, but the general idea is still the same. By the way, the one we are using is a NPN style transistor if you were wondering. Most of our projects will use this type of transistor (actually a model BC547 NPN Transistor to be exact).