If you have ever taken an electronic gadget apart, you have probably seen these guys: 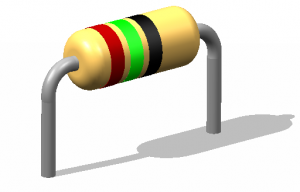 This is a resistor.  From the name you might guess what a resistor does: it resists the flow of electric current.  Resistors are kind of like making the electricity squeeze through a narrow opening.  An electric heater is a giant resistor.  As the electricity tries to flow through it, the electrons all get crowded and rub against each other.  This generates heat.

The symbol for a resistor looks like a saw blade:

This is the symbol for Ohms:

It is the Greek letter omega. 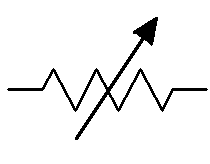 You often use resistors in circuits when you don’t want the electricity to overpower some device.  Almost any electronics project will need resistors of some value.

If you are trying to figure out what the colors mean, see our Resistor Color Code Calculator.

Here are some common electronics components in their natural habitat… 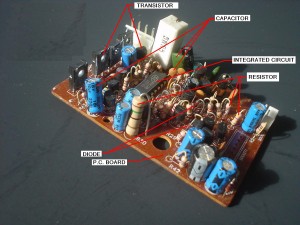